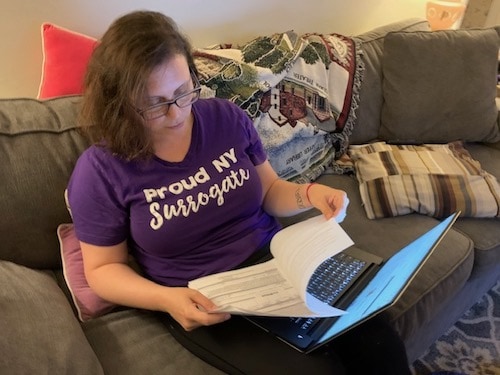 The part of surrogacy that legally protects you is your contract with the Intended Parents (IPs). Historically, surrogacy contracts in New York have been unenforceable, making surrogacy very tricky to navigate in the state. But the Child-Parent Security Act (CPSA), which goes into effect on February 15, 2021, changes all that.

A surrogate should and will always have her own lawyer, separate from her IPs, and that lawyer should specialize in Assisted Reproductive Technology (ART). For my surrogacy, I was fortunate enough to be referred to a fantastic ART lawyer, Casey DiPaola, who, along with Joe Williams, now owns and operates New York Surrogacy Center. Casey has experience in adoptions as well as both compensated surrogacies (in Vermont) and uncompensated surrogacies, which was what I was undertaking.

Being that I could not be legally compensated, my lawyer and my IPs’ lawyer had to be and were meticulous with the wording of our agreement, which was actually called a Memo of Understanding, not a contract. Any money given to me by my IPs had to be for either pregnancy-related reimbursements (for things like maternity clothes, copays, and prenatal vitamins), or for living expenses during the very end of the pregnancy and immediately afterward, like those that adoptive parents provide to birth mothers. Gosh, New York has been complicated! But that’s why it’s so important to have a knowledgeable and experienced lawyer.

I’m thrilled that Casey and Joe are so well versed in the CPSA and actually had a hand in shaping what it became. Once the CPSA takes effect, there will be new rules to follow, rules that make surrogacy safer for both surrogates and IPs. While NYSC surrogates will not be represented by Casey or Joe, they can know they’ll be referred to lawyers who are well-versed in the law and can feel confident in their journey knowing that their agency is owned and operated by experts in the law.