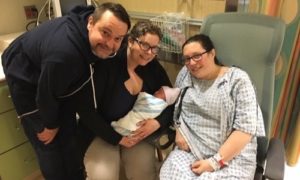 I remember calling my IPs to just give them a heads up that I was in the hospital. It wasn’t in our agreement that I had to let them know of something like that, but I felt like I should, because I was carrying their daughter. And then when the doctor wanted me to get a chest x-ray, I called to get permission, since x-rays during pregnancy are usually a no-no (however, chest x-ray exposed me to less radiation than an airplane). My IPs were awesome and always put my health ahead of everything, so they signed off on the x-ray.

I wonder, sometimes, if all that coughing and sneezing from having the flu is what caused me to start leaking amniotic fluid (probably not but who knows). It was a slow leak, barely noticeable, but I definitely suspected something, so I checked in to the hospital and sure enough, I tested positive for amniotic fluid and was admitted. I was just about 36 weeks along. Earlier than we would have liked, but what can you do?

It was a Thursday night, and I called my IPs to tell them we were having a baby possibly as soon as the next day. They were surprised but calm and drove up the next morning. All that next day we waited for labor to start but it didn’t. So that Friday night we started induction. Throughout the next 24 hours, I was having occasional contractions and I was partly dilated, but I wasn’t progressing enough. C-section time.

I was allowed one support person with me, and of course, it was my IM. My husband was home with our daughter, and my IF had their other daughter out in the waiting room (flu season meant no children allowed other than in the waiting room). But even if my husband had been available, I wanted my IM there, to see and hear her baby first. I already had the epidural in, so the anesthesiologist got the full-blown stuff going and I was wheeled into the OR.

No one told me about all the shaking! I guess it doesn’t happen to everyone, but my entire upper body got the shakes from the anesthesia. My IM tried to calm me with a hand on my shoulder. The curtain went up, I heard my OB say she was making the incision, felt some weird tugging, and then heard a cry.

As soon as the baby was cleaned up and wrapped up in a blanket, she was handed to my IM who then went to her own recovery room. She had her baby! I was so happy. I headed to my own recovery and waited for the anesthesia to wear off. And then to eat my first meal in over a day – an Italian sub provided by my IPs!

The rest is kind of a blur, but when I was finally able to walk again, I headed into the Special Care Nursery (a level down from a NICU, available to us since the baby was born at 36w1d), to finally meet who we all have since affectionately called my “ex-wombmate.” I also signed some paperwork that my lawyer had brought over regarding the adoption (remember, up until February of 2021, surrogacies in New York are treated like adoptions).

The next day we were all discharged (I chose to stay 48 hours rather than 72) and headed to our homes. My IPs live a few hours south of me, and are distant family, so we see each other a few times a year (but only once since COVID-19). I get pictures and videos regularly, including the baby’s first steps. My IPs will always be a part of my life, and one day, their daughter will learn about the unique way she came into the world: that her super distant cousin gave her a comfy place to grow until she was ready to go to her mom and dad.

What an amazing thing science has made possible, and what a joy to do. It’s not a walk in the park what with the injections of IVF meds and the aches and pains of pregnancy, but it was worth it. I’m 39 now, and many clinics will work with surrogates as old as 45, so if I’m cleared, I might consider doing this again!