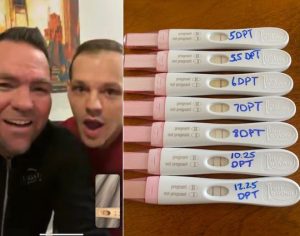 As I mentioned in my blog post about the transfer, the clinic waits 14 days to have patients get a blood draw to test HCG levels. That’s a long wait! Knowing that if the transfer were successful, I could get a positive on a home test as soon as five days post transfer, the intended fathers and I agreed that we would get on FaceTime early the morning of day 5 and I’d reveal the test “live.”

I was so nervous, mostly because I wasn’t sure how we’d handle the disappointment if the test came out negative. But at 6:25am, I took a home test and covered it up, hopped on FaceTime and revealed a positive test! We had a faint but clear line. The intended fathers were overjoyed!

Over the next week or so, I took tests every morning to see the line get darker and darker. Finally, on day 14, my blood test revealed an HCG level that left no doubt I was pregnant, and two days later a repeat test showed the levels properly rising.

Because of how doctors determine due dates, the first month of pregnancy is actually only two weeks (no one is pregnant for the approximately two weeks between their last menstrual period and when conception occurs, but doctors calculate based on last menstrual period). On the day of embryo transfer, I was considered 2 weeks and 5 days pregnant since the embryo had been frozen on day 5 of growth. By the time of the second HCG test, I was already five weeks pregnant!

Look for my next blog post to see how month 2 went!