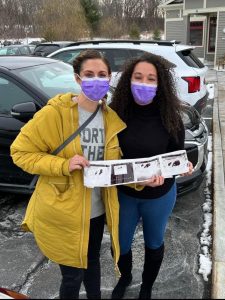 It was as early as 5 days post embryo transfer (5dpt) that I started testing at home and received a positive. I took 2 more home tests and they were all positive. The excitement was starting to set ALL the way in and I felt so much better knowing before our scheduled Beta test. I had been told that it was very possible to get positive home pregnancy tests and HCG levels reveal negative. March 21st came around, I went in for my HCG test at 8am and by noon they were calling me with POSITIVE news. My Beta numbers were super high. 1083 to be exact. It didn’t feel real. Our 2nd Beta test was March 23th and my numbers at that point were 2683. Exactly where they want them to be and with the higher numbers it sounded pretty possible that both embryos stuck. My Progesterone and Estrogen levels looked great and they scheduled us for our first Ultrasound appointment March 30th.

Both of my Intended Parents were able to meet me at CNY on March 30th for our very first ultrasound. We got to see TWO babies and hear TWO heartbeats. It was one of the most magical experiences of my life. At this point, because of the age of the embryos and date of our transfer, we were determined to be 5 weeks pregnant <3