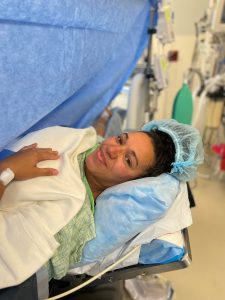 I woke this morning to a not so ripened cervix after the balloon was in for 12 hours. Belly Bud also did a complete turn in my belly overnight and was no longer face down. The Doctors tried an external cephalic procedure which allows them to use their hands to turn the baby. It was very painful, and sadly unsuccessful. We could have waited many more hours to see what my body would do, but the fact it was moving pretty slow at the start and I was in a large amount of discomfort and pain, a c-section was the direction we were heading in.

I am very thankful this wasn’t an emergency. There was plenty of time to get my husband and the IPs here to the hospital and we can sit and talk while waiting for the Doctor and Anesthesiologist. I was still really worked up at this point as a c-section was something I was very afraid of. I wanted to naturally deliver and found myself so angry at my body because induction was not moving faster or working.

The c-section was a lot to process on top of what my mind had already been mentally preparing for during this emotional departure. But honestly, the team and staff were absolutely golden and helped make this so much easier than I imagined. My husband was also great and I was happy to have him by my side and feel fully present during this. I originally planned to have Michelle in the operating room during c-section but the anesthesiologist suggested having my husband in there as my support person because it is quite a lengthy surgery. I was honestly still an emotional wreck leading up to my spinal tap. Once my husband came in I was much calmer and ready. They allowed my husband to record and take pictures for the IPs as he was the only one able to be in the operating room. My Doctor talked to me the entire time and Donnie was great about talking and taking pictures and recording while also making sure I was okay.