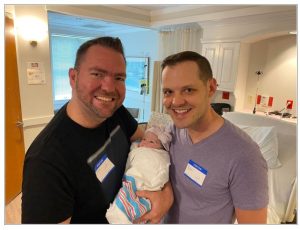 Since my previous birth had been a C-section, my OB highly recommended that this birth be a repeat C-section, which I was fine with. It was scheduled for July 29 at exactly 39 weeks gestation. However, when I went into my final OB appointment on July 25, I was getting slightly elevated blood pressure levels, and we weren’t getting the readings we were looking for on the non-stress test (not enough periods of heartrate acceleration). Nothing was urgent, but my OB decided I should head to the hospital and deliver the next day at the latest!

I let the dads know, and not surprisingly, they were ready to hit the road! They arrived in town around 6 pm and we were able to have dinner together before getting ready for the big day.

I was due to arrive at the hospital at 11:30 am for a 1:30 pm C-section. The dads were so excited that they were there well before my husband and I! We all checked in and got a very nice, air-conditioned labor and delivery room where I could have privacy via curtain if I needed it, but plenty of seating for everyone. And then we finally got confirmation on something there had been so much back-and-forth on: who could be with me in the OR. As a C-section patient, I was allowed one support person with me in the OR, which meant that only one of the two dads could be with me. Ideally, both would be. And then, the hospital would not allow my husband to come into the OR once one dad and baby had been whisked out. So my husband ended up being with me the entire time, and both dads waited to have the baby brought to them.

I was nervous about the C-section even though I’d had one before. Getting the spinal administered is not the most fun thing, but my nurse was very supportive and comforting during the process. It’s fast-acting, so before I knew it, I was lying on the operating table with no feeling below my chest. The drape was put up and my husband was brought in.

Then it was a whole bunch of strange pressure and tugging as my OB, who is an excellent surgeon, started the process. A few minutes into it, she warned me of feeling a lot of pressure. Two big pushes down on my belly and we heard the baby cry! It was so great to hear that, knowing she was out and breathing nicely. My OB asked if I wanted to see her, but I declined, wanting the dads to meet her first.

It wasn’t until a few hours later after the anesthesia had mostly worn off and I was in a recovery room, did I finally get to meet baby Ava. What a cutie! And so much hair! Born at exactly 8lbs and exactly 20 inches, she is perfect! Dads were over the moon.

I am honored to be NYSC’s first surrogate to complete a journey. They were most supportive this whole time, and I had the best-intended parents I could be matched with. I will never forget this experience.